My art work is strongly influenced by my frequent travels. Driving many times cross-country from New York City to the West coast I explored extensively the Western deserts, especially the Sonoran desert along Baja California, Mexico. Being exposed to fierce natural forces in the arid cactus desert of B.C.S. I tasted another dimension of time and space. Every time I returned there doing sketches in soft pastel I was struck by the absence of color. This changed by the day, suddenly its landscape appeared much more vivid and colorful. The desert was revealing its secrets. Nowadays confronted with a new empty canvas in my studio I'm often taken back to that experience. 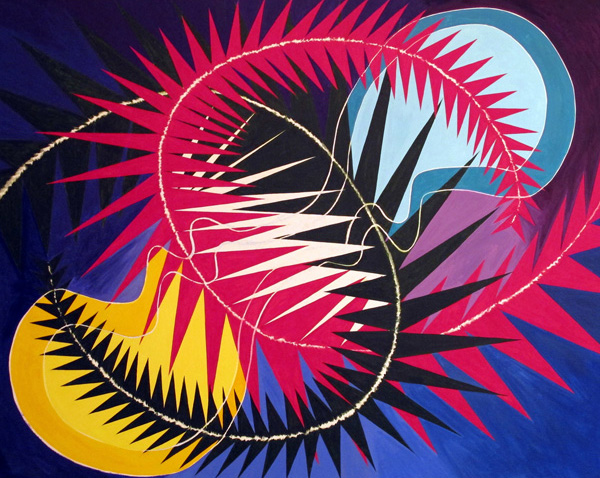 A lifelong fascination with the universe, its trillions of suns and planets has inspired my art work and my view of being, experiencing time standing still in a vast space. I'm further intrigued by polarity: male-female, sun-shadow, day-night, emerging and dissolving.

In my oil paintings I try to catch the beat of life, working wet in wet and adding layers of paint mixed with sand. Traces of deeper layers are revealed by scratching into the surface. Sometimes fragments are cut out, disrupting the flow and creating another somewhat alien dimension. I use bright strong colors in clear geometrical and outreaching forms. Often my paintings are a combination of carefully planned precision and spontaneous strong physicality.